Work in television newsrooms as on-air reporters and anchors seems exciting but these are only part of the team working round the clock and behind the scenes. Ever since news reporting became a 24-hour broadcasting competition between news channels, working in TV newsrooms came to mean irregular work schedules and beating tight deadlines.

Still, they aren’t thankless jobs, because according to the Bureau of Labor Statistics, the related compensations are way above the average annual median $46,800 salary of ordinary US workers.

There are different types of TV news producers and their titles depend on the nature of their job as overseers of a news program. Generally, they start out as news producers who do background work of writing scripts, collaborating with field reporters, editing news videos and coordinating broadcast work with news anchors.

News production assistants are basically writers and editors who create the scripts and teasers being read by news anchors, including the weather report of meteorologists. The purpose of the scripts is to promote stories in ways that can immediately catch the attention of viewers to keep them plugged in to their TV channel; or to encourage viewers to tune in to the scheduled news program.

The desk editors are tasked to keep track of developing stories and to dispatch reporters and photographers who will provide up to date reporting of breaking news. That being the nature of their jobs, desk editors must be able to create scripts and fact check stories on the fly, as they have to compete with other news channels in reporting important news developments.

The TV News Director is in charge of selecting and then scheduling content to feature as news to air to viewers. In order to be effective in maintaining quality of news content , the news director constantly monitors the happening of events and fact checks stories for accuracy, as well as ensuring the observation of all rules and regulations in news reporting.

A career as a full-fledged News Director usually starts by working as Assistant News Directors in larger local news outlets with goals to move on as a News Director in outfits with national coverage. 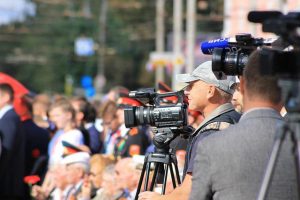 That way, they can make immediate and proper adjustments in their transmission equipment.

Since the nature of their jobs are highly technical, not everyone interested in applying for these tech-related jobs have the confidence in writing a letter of application as cover letter for their resume. Inasmuch as the letter accompanying an applicant’s curriculum vitae can make or break one’s chances of being invited for an interview, they can always use some professional help in this aspect.

In Germany, a company called Gekonnt Bewerben offers writing applications or cover letters as a service. Anschreiben schreiben lassen (writing cover letters) may seem easy for news writers and editors but can be quite challenging for those who are more focused in honing their skills in doing technical work.